Strong As A Mother: Why It’s So Important For Mothers To Train In Brazilian Jiu-Jitsu By Jill Gill 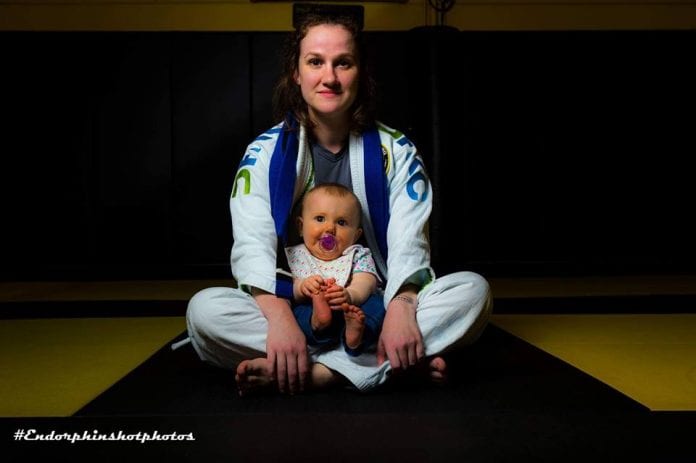 If you’re a mother like me, you’re probably behind schedule right now. In fact, I had planned on writing this article two days ago, but here I sit on Mother’s Day writing this on my phone as my newborn nurses and my preteen waits for help fixing her hair. This is motherhood.

While motherhood defines my greatest role, it is not my only definition. I thrive on going against the grain, which is why I choose to train Brazilian Jiu Jitsu. Women are making up a larger and larger part of the BJJ community, but mothers in particular are a vital part of the sport’s continued growth.

Not only are mother’s often the ones signing their young children in to BJJ classes every week, but they are now joining in training as well. Why are mothers actively training in BJJ so important to the sport, and how can the BJJ community support their continued role as both mother and BJJ practitioner?

It’s easy to see the moral decline in today’s youth. There are more school shootings, gang related violence, unplanned pregnancy, STDs, and bullying than ever before. It’s also a proven fact that parents play a direct role in how children view the world around them, so let’s think about how a child might view their mother training in Brazilian jiu-jitsu.

The Jiu Jitsu Times asked BJJ moms from around the world what they hope their kids learn from watching them train. The answers were overwhelmingly similar, and purple belt Miyo Strong summed it up beautifully:

I HOPE THEY SEE THAT FAILURE IS AN INDICATOR OF SUCCESS. THAT ATTITUDE AND EFFORT ARE ALWAYS IN OUR CONTROL. THAT WOMEN AND GIRLS SHOULD EMPOWER AND LIFT ONE ANOTHER RATHER THAN BREAK AND BELITTLE EACH OTHER. AND ALSO, I WANT THEM TO SEE THAT IT’S NEVER TOO LATE TO CHASE YOUR PASSIONS

Aren’t these goals we hope to teach all of our children? What better way to teach them than leading by example? BJJ moms are not just talking the talk, they are putting one exhausted foot in front of the other to walk the walk. BJJ moms are showing their children that not everyone gets a medal, and that’s ok. They’re showing their children how to lose with grace, so when the day doesn’t go their way, they can handle their young emotions in a healthy way.

We also asked moms what their greatest challenge is in training jiu-jitsu. Once again, the answers were eerily similar and boil down to “mom guilt”. We overextend ourselves to such a degree that adding jiu-jitsu into the mix often seems impossible. I know it’s been a major contributing factor in growing the women’s program at my own school. The contradiction to this school of thought is that the mom’s who take that time for themselves end up much less stressed and ultimately interact with their kids in a much more productive manner. The added stress relief that specifically comes from physically challenging ourselves in a martial art is just a bonus that most non-training moms don’t realize yet.

The key to balancing motherhood and a regular jiu-jitsu schedule is support. Support from our families, friends, and training partners. Unconditional, no strings attached, no judgement, just encouragement. The next time you’re training and there’s a kid screaming at their mom on the mat, instead of cutting eyes at the mom, give her some grace. Recognize that mom for what she is: a warrior and a nurturer.

Get a Free Uniform & Consultation!

Let me put this way: you WON’T find a better facility, better instruction and better environment anywhere around. Professor Filipe is one the hardest workers I met and he will make sure you achieve your goals, no matter what are they.

Everyone should join Nitro BJJ, unless you don’t want your life to get better by 200%.

Great place to work out and train BJJ

Get a Free Uniform & Consultation!